SCENE: Inside an old inn.

Villagers are seated at tables, talking and laughing. Jack the middle-aged keeper serves behind the bar (right of stage) and his daughter Bess collects glasses and chats with the customers. There are subdued sounds of a storm outside and often rain is blown against the inn’s windows (back of stage). The old inn door (also back of stage) bursts open to admit Arthur, a well-bearded fisherman, and the sound of the wind howling. Arthur struggles to close the door, then removes his sodden overcoat and hangs it on a stand just inside the door, before walking slowly to the bar, greeting people he recognises as he passes the tables.

Here is the Poem of the Month for February, originally published on the official Happenstance website <(:-)

And here are the P-i-R's notes:

Welcome to Poem of the Month for February!
The P-i-R has composed something a little different this month: ‘Devil’s Deeds’ consists of a scene inspired by the song performed before Happenstance launch into the dance entitled ‘Much Wenlock’.
I had thought there might be a connection between the town and the lyrics, but my sources proved vague on this: ‘What is it all about, you ask? Goodness knows!’
Readers will note that the lines take the form of an eight-verse fourteener. I’ve written notes on this to accompany my ‘The Winchcombe Morris side of yore’, here: http://happenstancepoetry.blogspot.co.uk/2014/05/the-winchcombe-morris-side-of-yore.html
And here is a video of Happenstance performing ‘Much Wenlock’, in Tewkesbury on Boxing Day 2015: https://www.youtube.com/watch?v=BmEIt4Qdh-8
Huzzah!
<(:-)
Posted by Felicity Teague at 11:01 PM

* * *
Welcome to Poem of the Month for December!

Here is the poem published on the official Happenstance site last month. It’s a pantoum that celebrates passing the darkest day of the year and moving towards the Spring.

I wasn’t sure whether there was any association between the Winter Solstice and Morris, so I emailed Cressida for guidance. Her response was positive and she provided many useful pieces of information to inspire my poem. A thousand thanks to Cressida from the P-i-R!

Any readers interested in the pantoum form are welcome to read my notes on the first such piece I composed for Happenstance, at http://happenstancepoetry.blogspot.co.uk/2014/05/isbourne.html

Posted by Felicity Teague at 9:30 PM

’Tis Autumn and the leaves are turned,
and fallin’ red and yellow,
the wheat is picked, the fields all burned,
let’s drink and feel well mellow!
[Chorus]
Wassail, we sang to the grand King Tree,
and all his court and county,
and hark, the boughs swingin’ low with glee,
full blessed with apple bounty!
The Winter orchard were asleep,
we woke it with our stickin’,
our weavin’ round, a skip, a leap,
set Nature’s clock to tickin’!
[Chorus]
Time came to rouse all orchard souls
from Snowshill far as Stroud, see,
with howlin’ pans o’er fields and knolls,
and rifle firin’ loudly!
[Chorus]
We hung a ball of fat, a treat,
for orchard’s guard, red Robin,
then cidered toast, ’twas sour and sweet,
set fruit-tree sap to throbbin’!
[Chorus]
Some cider next, we took and poured
’round King Tree’s roots and trunkwoods,
to tempt him to provide a hoard
for brews to make us drunkards!
[Chorus]
And last, we raised a glass to say,
our hopes for this year’s Autumn,
fruit hangs from every branch today,
’tis red and green and all firm!
[Chorus]
* * *
Welcome to my Poem of the Month for November! (POTM is a new feature on the Happenstance official website and all back issues will appear here.)
I haven’t seen Happenstance in action for a while, as pain has prevented travel. However, last Autumn I was able to attend Snowshill for the Apple Festival. At that time, I wasn’t aware of the part played by Happenstance in the success of the orchards, as I hadn’t witnessed the wassailing of orchards in January. But at the beginning of this year, I was able to watch the wassail activities at Postlip – so I appreciate the context in retrospect!
I wrote a song describing the wassail activities at Postlip in late January and I draw on this to compose the verses and chorus above. ‘Drinking Song’ describes all the rituals that were involved in waking King Tree and the other fruit trees and orchards across the shire. I use the same rhythm and the same rhyme scheme – perfect rhymes for the first and third lines, near rhymes for the second and fourth lines. Some of the near rhymes are quite tricky and the critic might wince at ‘Autumn’ and ‘all firm’ particularly! However, this poem/song is intended to be performed by keen drinkers, so Received Pronunciation is not necessary.
Cheers!
<(:-)
Posted by Felicity Teague at 11:39 PM

When the row-boats are moored on the café-side deck
and the shutters are closed for the day
and a coot tiptoes under the tables to peck
at some crumbs tumbled off a tea tray,
then the lake stills and settles around the low quay
and the elegant grebes paddle by,
calling, ‘Ca-ca-ca-ca-ca!’ and whistling, ‘Wuh-ree!’
upon shimmering mirrors of sky.

When the children abandon the small wooden swing
hanging down from a brittle-bark plane
by a length of grey rope fraying gently to string
swaying slowly through droplets of rain,
then the lake stills and settles around the old tree
and the elegant grebes paddle by,
calling, ‘Ca-ca-ca-ca-ca!’ and whistling, ‘Wuh-ree!’
upon shimmering mirrors of sky.

When the joggers stop pounding the waterside path
and turn homeward towards the far town
while the dogs cease their splashing in willow-lined bath
once their owners have called with a frown,
then the lake stills and settles around the calm lee
and the elegant grebes paddle by,
calling, ‘Ca-ca-ca-ca-ca!’ and whistling, ‘Wuh-ree!’
upon shimmering mirrors of sky.

Once again, the P-i-R apologises for a few months of non-attendance, due to a rickety hip <(:-0 (sigh)

The above is intended as an interval piece, while I wait to receive instructions on how to use WordPress, enabling me to relocate to the new site. (There is no rush with this, as my work schedule is full at present!)

Recently I received great praise for my 'Opus pigeon', together with a request for something similar, so I'm delighted to post this piece inspired by the sights and sounds of dear grebes in Lower Lake, Pittville Park. They were especially active when I visited the park with Mr T. and an uncle and aunt earlier this summer. Later that evening, as I listened to Chopin's Barcarolle in F sharp major, they made a reappearance in my mind, swimming in time to the music.

On the Terrace of Sudeley, come Bank Holiday,
after May Queen is crowned and a song for Green Jack,
Happenstance raise the Maypole, to welcome the May
in their blue and green tatters, hats feathered and black.

After May Queen is crowned and a song for Green Jack,
Hap’s musicians launch into a jubilant tune
in their blue and green tatters, hats feathered and black,
to rejoice in the Spring on this fine afternoon.

Hap’s musicians launch into a jubilant tune,
as around the green pole all the ribbons parade,
to rejoice in the Spring on this fine afternoon
reds and yellows combine and the patterns are made.

As around the green pole all the ribbons parade
chestnut candles ascend, bluebells chime, tulips bloom,
reds and yellows combine and the patterns are made,
courting pigeons in silver gowns murmur and plume.

* * *
Alas, the unrelenting master Work continues to wrench the P-i-R from the embrace of Poesie, but by last Monday a goodly portion of another splendid scholarly tome had been completed and thus I felt able to travel to Sudeley for the May Day celebrations featuring Happenstance. And Brother Adrian was kind enough to convey me thither, in the trusty WAV.

I attended this event last year and found it very enjoyable. Happenstance’s dance to recall the tradition of chimney-sweeps was particularly interesting and it inspired this song: http://happenstancepoetry.blogspot.co.uk/2014/06/chimney-sweepers-dancing-day.html

I was pleased to watch the chimney-sweeps’ dance this year too, especially as Mrs T was involved, wearing red pyjamas. Happenstance also performed a new dance, [name], the subject of my next poem once Mrs T has performed it for me at Poet’s Nest, to refresh my memory. For now, I’ve composed a pantoum to describe the Maypole dance. The structure is the same as in my ‘’ and ‘Isbourne’, but whereas each line of those two poems is performed as iambic tetrameter, here I use the waltzer rhythm, ~ ~ / – ~ ~ / – ~ ~ / – ~ ~ / –, just for a change!

The Maypole dancers were excellent and I liked the pattern of the red and yellow ribbons at the top of the green pole. I was reminded of the superb sight after the dance, in a corner of Sudeley grounds planted with beautiful tulips; see Bro A’s picture below. 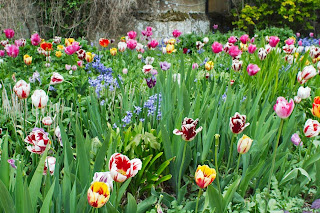 Posted by Felicity Teague at 6:28 PM

Sing pigeons sing as the sun starts to rise . .
perching in Father Lime, close to the skies . .
watching the world wake with golden-rimmed eyes . .
sing pigeons sing thy sweet tune . . . . .

During the next fortnight, I hope to compose a tune for my ‘Spring Song’, a poem written last year (http://happenstancepoetry.blogspot.co.uk/2014/05/spring-song.html). By way of interlude, I’ve composed this rather foolish sort of ditty, inspired by the beautiful tones of the wood pigeons in residence around Poet’s Nest, as I like to term my abode.

Since my youth, the call of wood pigeons has been my favourite of all birdsongs – though the soft coo of doves comes a very close second. So imagine my joy, as I sat checking references in a splendid scholarly tome one afternoon, in hearing a solitary wood pigeon calling from the garden and realising that – huzzah! – the rhythm of the call fits neatly into a waltzer piece.

Thus the ditty, ~ - - ~ - - ~ - - ~ - -, with each ‘.’ after a word or ‘oo’ indicating that the same should be sustained to the end of the line. I have a tune in mind for the verses, to be played sotto voce throughout the chorus. As the chorus is faithful to Opus pigeon, the last ‘oo’ is abrupt, though the verse tune continues until the final beat.

On arrival at Postlip, I spent some time surveying the view of the Farm from the Hall while recovering from the journey. (Mr T. is a delightful driver, but my knee injury has worsened this year.) The harsh calls of rooks led my gaze to their location, high amid the branches of beeches. Then I heard sheep bleating from the far fields, so I watched the dear woolly ones awhile.

The cinquain works well for building tension, then abruptly easing off. I’ve used it elsewhere in this way; here, each last line with its trailing ellipsis hopes to lead the reader into the next verse – not only 1 to 2, but also 2 to 1 on repeat. I write ‘wide’ twice to create an echo… echo… echo…